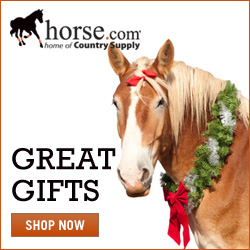 Pennsylvania agricultural officials are reporting a Equine Herpes Virus (EHV-1) case in a horse at a private equestrian facility in Chester County, Pennsylvania.

The horse is alive and remains on its home premise.

The premises has been quarantined by the Pennsylvania Department of Agriculture, Bureau of Animal Health. The index case had not left the premises for over three weeks and was placed in strict isolation immediately when clinical signs were recognized. All horses on the premises are being monitored for clinical signs of EHV-1 infection and biosecurity precautions have been implemented to prevent the spread of the virus.

EHV-1 infection in horses can cause respiratory disease, abortion in mares, neonatal foal death and neurological disease. The neurological form of the disease is known as Equine Herpes Myeloencephalopathy (EHM) and may be caused by damage to blood vessels of the brain and spinal cord associated with EHV-1 infection. EHM is most often due to the neuropathogenic strain of EHV-1, but may occasionally be caused by the non-neuropathogenic strain of the virus.

EHV-1 is easily spread and typically has an incubation period between 2-10 days. Respiratory shedding of the virus generally occurs for 7-10 days, but may persist longer in infected horses. For this reason, a twenty-one day isolation period of confirmed positive EHM cases is recommended along with stringent biosecurity protocols. Similar to herpes viruses in other species, the latent form of EHV-1 can reactivate at a later date, but generally with a low viral load posing a low risk of infecting other horses. Humans are not at risk of contracting the virus, however humans can act as an indirect mode of transmission.

From many manuscripts of Antiquity...

Recent reports point out a change in the virulence of group A...

At the same time, many antique...

Metronidazole could also be used in place of amoxicillin in these allergic...