With the advent of modern antibiotics – Hansen’s Disease, aka Leprosy – has been vastly reduced around the globe over the past couple of decades, although more than 200,000 new cases are still reported each year (see WHO Prevalence of leprosy).

While limited cases of drug resistant Leprosy have been reported (seePrimary Multidrug-Resistant Leprosy, United States), this infection remains largely treatable. The World Health Organization has this to say about MDT (Multi-Drug Therapy) and resistance.

Is the threat of rifampicin-resistant leprosy a serious problem?

Although  rare, the United States still sees about 150-220 cases each year. Indigenous cases are primarily associated with contact with armadillos – for some, a southern delicacy – and known reservoir for the bacteria:Mycobacterium leprae (see my 2011 blog  Hint: Don’t Order The `Possum On the Half Shell’)

Here in the United States, Hansen’s disease is studied and tracked  by the HHS’s National Hansen’s Disease (Leprosy) Program.  Some excerpts from their homepage:

A genetic study at the National Hansen’s Disease Program reports that armadillos may be a source of infection in the southern United States. The Program advises:

All of which brings us to a fascinating new  Mississippi State Department of Health report, released yesterday, on the prevalence of Hansen’s disease in that state. Some excerpts follow:

Mississippi Morbidity Report
Volume 30, Number 5 September 2014
Hansen’s Disease (Leprosy) in Mississippi
Background: Leprosy, also known as Hansen’s disease, is a chronic infectious disease of the skin and peripheral nerves caused by the bacteria Mycobacterium leprae (M. leprae). The infection, with an average incubation period between 8 and 12 years, is seen mainly in poor countries and rarely seen in developed nations. In the United States, 213 new cases of leprosy were reported in 2009 [1]. Approximately 75 percent of these reported cases occurred among immigrants. However, endemic acquisition foci exist in parts of the south-central U.S., primarily in Louisiana, Mississippi, Florida, and Texas [1].

Transmission: Although the mode of transmission of M. leprae has not been proven, person-to-person aerosol spread from infected nasal secretions is posited in most cases worldwide. However, there is increasing evidence that a very small number of cases may be classified as zoonotic infections in countries where nine-banded armadillos (Dasypus novemcinctus) are found in the wild. As the wild nine-banded armadillos are the only identified species in the U.S. that can serve as a reservoir for M. leprae in nature and has a range that includes the Southeastern U.S., it has been postulated that they may be spreading the bacteria into the environment and transmitting infection to humans in the U.S. south [2]. Human indigenous leprosy cases have been described in the same geographic regions where infected armadillos have been reported, mainly Texas and Louisiana and Mississippi [3]

Epidemiology of Hansen’s disease in Mississippi: A total of 53 cases of Hansen’s disease have been reported in Mississippi from 1922 to 2013. The majority of the cases (43) have been classified as indigenous cases, defined as occurring in individuals living for more than 12 years in Mississippi prior the diagnosis(see Figure 1). Ten cases were classified as non-indigenous due to foreign birth (in a country with endemic Hansen’s disease) or residency in MS of less than 12 years. Of the indigenous cases, the median age among the reported cases is 69 years, with ages of cases ranging from 23 to 87 years at time of diagnosis. A majority of the reported cases are male (77%); 86% of the cases are Caucasian and 14% are African-American. 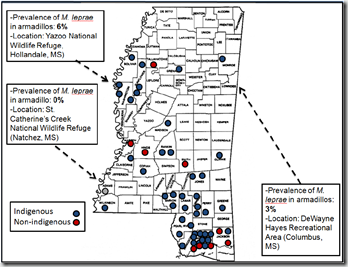 Cases of indigenous leprosy have been identified in many parts of the state, with the majority occurring in south Mississippi and the Delta. Armadillos positive for M. leprae have been identified in two areas in Mississippi, the Delta and in Northeastern Mississippi. (Figure 2). Of sixteen indigenous cases with information on prior armadillo exposure, eight (50%) reported prior contact with armadillos. Information pertaining to the nature of the exposures was not available

Conclusions: Hansen’s disease is a rare but increasing diagnosis among Mississippi residents. Increased reports of Hansen’s disease in Mississippi may reflect an increasing incidence, improved reporting or improved diagnostics. The majority of cases were identified in patients older than 62 years of age and 50% with available data reported previous contact with armadillos. Medical providers should consider a diagnosis of Hansen’s disease in patients with persistent skin lesions, particularly if associated with localized loss of sensation or a history of exposure to armadillos.

While not a huge public health problem today, this report is a good reminder for doctors that while you should always first `think horses’ when you hear hoof beats, every once in awhile there’s a zebra hidden in the herd.

Hello all my viewer I was diagnosed of Lyme...