by Staff
February 17, 2016
Latin America and the Caribbean
1 Comment

Today, the Brazilian health ministry released update numbers on the microcephaly situation in the country and it shows a total of 4,443 suspected and confirmed cases, 3,935 and 50, respectively.

Only a small number cases can be attributed to causes other than Zika, according to health officials.

In related news, a report being promoted by the University Network of Environment and Health that attempts to link the larvicide pyriproxyfen and the microcephaly outbreak in Brazil has drawn much criticism from the scientific community, in fact, it has been called downright dangerous.

In addition, actors Mark Ruffalo and George Takei pushed stories promoting the idea on their respective social media pages. These are clearly not the people we should be listening to when it comes to issues of science.

A number of scientists made statements on the situation.

Ian Musgrave, with the University of Adelaide: “The claims that pyriproxyfen causes microcephaly “simply not plausible.” 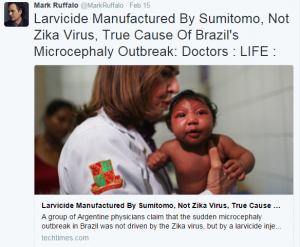 “The effect of this [report] to cause panic in people, and to prevent an effective response to disease carrying-vectors, is a very substantial negative. If they wanted to control the mosquitos, what are they going to use now? Something even more toxic?”

University of Pittsburgh microbiologist Ernesto Marques, Ph.D., who is studying microcephaly in Brazil, said the larvicide-microcephaly link was false, and reiterated the Brazilian Ministry of Health’s statement that pyripyroxyfen has been used for decades with no reports of increased birth defects.

Grayson Brown, Ph.D.,  with the public health entomology laboratory at the University of Kentucky in Lexington: “The larva-killing toxin is applied to areas where microcephaly already occurs, because that’s where it’s most important to keep mosquito numbers down. The whole notion is misplaced cause and effect.”

Japanese company, Sumitomo Chemical, the manufacturer of pyriproxyfen rebuked the linking of its larvicide to microcephaly, pointing out that the World Health Organization has approved this chemical for mosquito control, and that it has been used in France, Denmark, Spain, Turkey, the Dominican Republic and Colombia.