The Wildlife Rescue Association of British Columbia is reporting a salmonella outbreak in Pine Siskins. 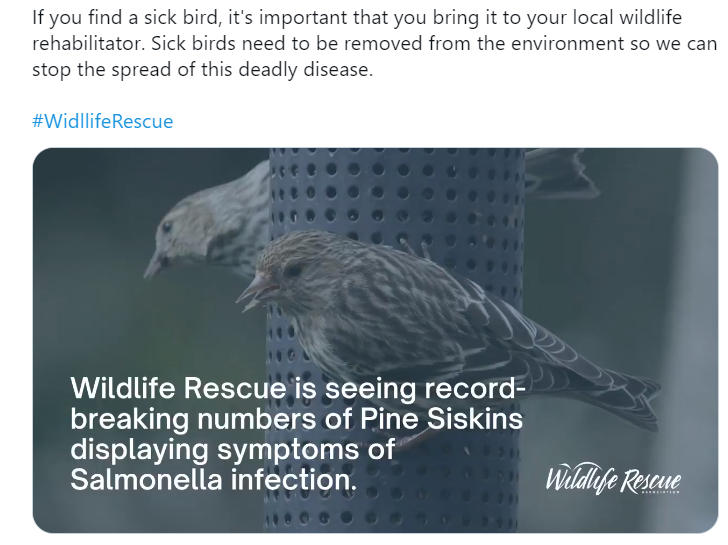 They say increased reports of sick and dying birds have been noted across the Pacific Northwest, from Oregon to British Columbia.

Any bird can be impacted by salmonella, however, Pine Siskins seem to be most vulnerable. This is potentially due to their social nature, flocking and feeding in close association with each other making it easy for the disease to be passed from bird to bird.

Since the New Year began, 36 Pine Siskins suspected of Salmonella poisoning have been brought in, and more are coming in every day.

Salmonellosis is primarily transmitted by fecal contamination of food and water by sick birds, although it can also be transmitted through bird-to-bird contact. High traffic spots, such as bird feeders, create a source point of transmission and can exacerbate the spread of this deadly disease. Removing the feeders completely is the best solution to encourage birds to disperse, thereby minimizing the potential for infection. If you choose to keep your feeders up, they must be properly maintained to foster a healthy bird environment.

If you are experiencing sick birds at your feeder: remove the feeder for at least 14 days so birds will disperse and are less likely to be exposed to the infection.

Nearly 9,000 poultry to be culled in Denmark due to bird flu outbreak

Ehrlichiosis in Australia: Cases are exploding in some regions