by News Desk
October 1, 2022
Headlines, US News
No Comments

The Centers for Disease Control and Prevention (CDC) issued a food safety alert this week regarding a multistate outbreak of Listeria monocytogenes infections.

Interviews with sick people and laboratory data show that brie and camembert made by Old Europe Cheese Inc. may be contaminated with Listeria and may be making people sick. Of the five people interviewed, four (80%) reported eating brie or camembert cheese.

FDA and the Michigan Department of Agriculture and Rural Development inspected the Old Europe Cheese facility and identified the outbreak strain of Listeria in a sample collected from the floor in a cooling room.

On September 30, 2022, Old Europe Cheese, Inc. recalled more than 20 brands of brie and camembert cheese. Recalled cheeses were sold nationwide in the United States and Mexico at supermarkets, other retail stores, and wholesale stores. 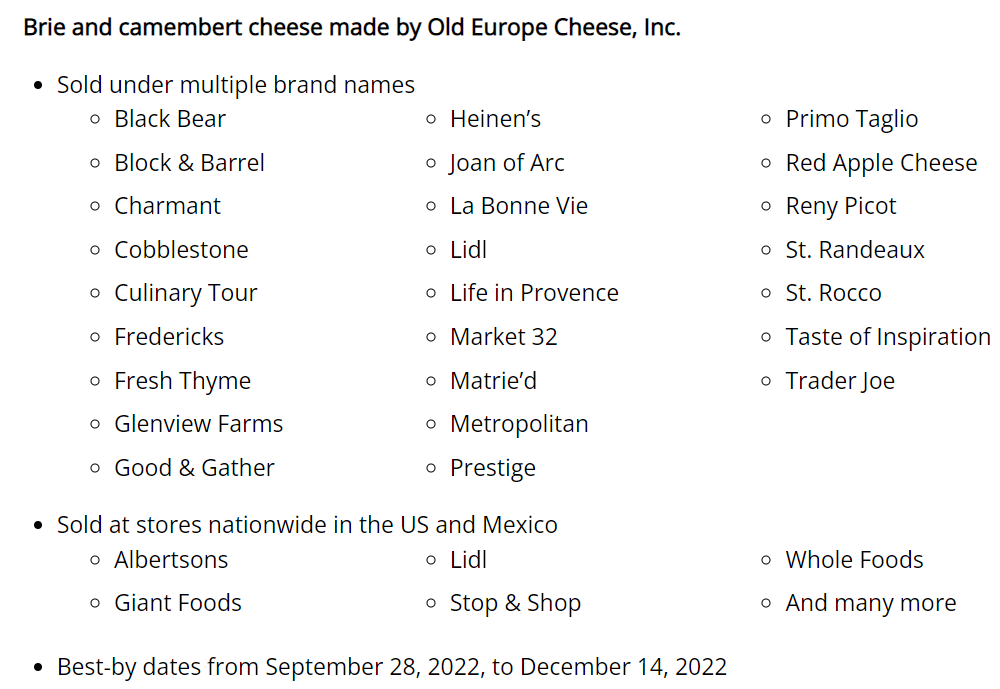 Investigators are working to determine if additional products may be contaminated.

Health officials are telling the public not to eat recalled cheese.- Throw it away.

Listeria can cause severe illness (known as invasive listeriosis) when the bacteria spread beyond the gut to other parts of the body. Almost all severe illnesses result in hospitalizations and sometimes death.

Symptoms of severe illness usually start within 2 weeks after eating food contaminated with Listeria, but may start as early as the same day or as late as 10 weeks after.

Pregnant women and their newborns, adults 65 years or older, and people with weakened immune systems are at higher risk for severe illness.

Other people can be infected with Listeria, but they usually get mild food poisoning symptoms, like diarrhea and fever, and usually recover without treatment.