by News Desk
January 20, 2019
Headlines, Latin America and the Caribbean
No Comments

Health officials in Costa Rica continue to investigate the hepatitis A outbreak reported in the province of Puntarenas where 33 cases have been reported during the first 11 days of the year, according to the Ministerio de Salud (computer translated). 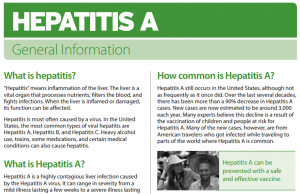 Cases have been primarily reported in the following districts: Barranca (10), Oak (8) and Chacarita (7).

Officials announced last week that contaminated water has been ruled out by laboratory analysis and the epidemiologists now aim to confirm as a source of contamination the poor hygiene in the preparation of food products and the presence of fecal coliforms (feces) in the food.

After confirmation of the cases, the Ministry of Health issued a health alert to intervene and activate the health protocols in the active surveillance of new cases, both in the health services and in the population close to the suspects. In addition, urgent actions are taken in health services, protection of water sources for consumption, and dissemination of prevention measures for the population.

The Regional Directorates of the CCSS and the Ministry of Health intensified health promotion and prevention activities, using all local means of communication to inform the population about the disease, existing cases and hygiene measures in preparation and handling. of food, personal hygiene measures for the prevention of Hepatitis A.

The Director of Health Surveillance, Dr. Rodrigo Marín, vehemently calls the people of Barranca, Chacarita and El Roble to take measures to prevent and avoid new cases: “Self-care and food safety are the more effective measures to combat Hepatitis A. Self-care refers, in this case, to proper personal hygiene practices such as proper and regular hand washing, “said Marín.