The world watched helplessly as the Ebola virus consumed West Africa in the Spring of 2014; international Christian relief organization Samaritan’s Purse stepped forward to help. Now “Facing Darkness” shares the moving story of how relief teams relied on their faith and courage to battle this deadly disease. 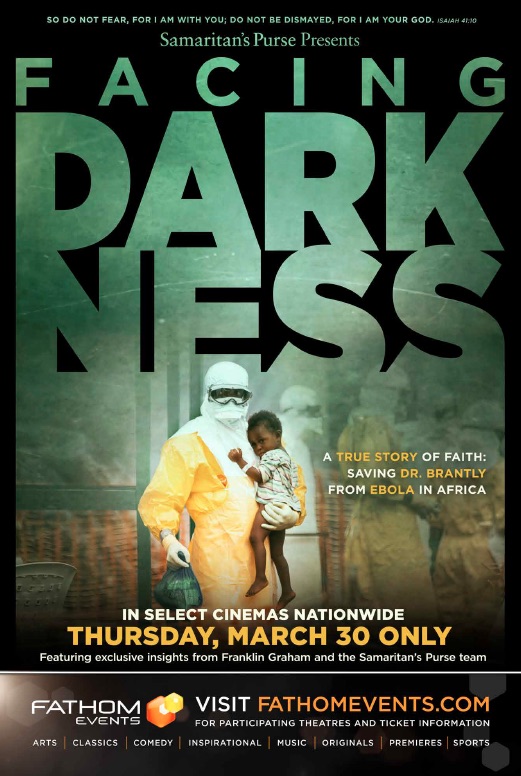 This event comes to cinemas nationwide for one night on Thursday, March 30, 2017 at 7:00 p.m. local time, including exclusive behind-the-scenes details from Samaritan’s Purse President Franklin Graham and Ebola survivor Dr. Kent Brantly about the dramatic life and death struggle as the epidemic raged in Liberia.

Tickets for “Facing Darkness” can be purchased online by visiting www.FathomEvents.com or at participating theater box offices. Fans throughout the U.S. will be able to enjoy the event in more than 400 select movie theaters. For a complete list of theater locations visit the Fathom Events website (theaters and participants are subject to change).

Samaritan’s Purse had already been working in West Africa for many years when the Ebola outbreak hit the area. Relief workers, doctors and nurses quickly shifted their focus to efforts to helping Ebola victims and launching prevention programs to combat the disease. A few weeks later, two medical missionaries involved in the organization’s effort in Liberia became infected. “Facing Darkness” follows Graham as his team attempts something that had never been done before – the international transport of an Ebola patient back to the United States for treatment.

“We had treated our first Ebola patient in Liberia in June,” Brantly says. “On July 23, I woke up feeling under the weather and was diagnosed with Ebola shortly thereafter. And I prayed God would help me be more faithful even in my illness.”

While the world looked for a cure, Graham and his staff were hard at work to find a plane. “The clock was ticking, and Dr. Brantly was dying,” he said. “Our team worked twenty-four-seven. People didn’t sleep for days, calling everybody they knew, every contact in the government. Eventually, we got through to the person in charge of the medical plane equipped to quarantine deadly diseases. It was God behind the scenes pulling the strings, pulling the levers that I believe saved Dr. Brantly’s life.”

“Ebola swept into West Africa with seemingly no end in sight,” Fathom Events Vice President of Programming Kymberli Frueh said. “Then Samaritan’s Purse–a symbol of faith–brought relief and hope to thousands of people. In taking care of these two courageous missionaries, Samaritan’s Purse highlighted the devastation of the illness to the world.”

For individuals, groups, families and churches, “Facing Darkness” puts names and faces to the fear and heartbreak that gripped the world–and the faith that stood in its path.

One thought on “Ebola: Samaritan’s Purse film, ‘Facing Darkness’, comes to U.S. cinemas for one night on March 30”