The second most populous country in the world, accounting for nearly one-fifth of the global population, India, is also home to the world’s largest absolute burden of at least 11 major neglected tropical diseases (NTDs), according to a recent editorial by Dr Peter Hotez and Ashish Damania with the Baylor College of Medicine | BCM · National School of Tropical Medicine in PLoS Neglected Tropical Diseases.

In addition, India leads the world in terms of the total number of cases for each of the major NTDs, excluding those that are spatially bound by their requirement for unique insect vectors or snail hosts (e.g., schistosomiasis, onchcocerciasis, human African trypanosomiasis, and Chagas disease)

The authors write that with a population exceeding 1.3 billion you might expect that nation to harbor a significant NTD burden. However, India also has the seventh largest economy in terms of total gross domestic product (GDP), and several diseases stand out for their disproportionate impact on India’s health.

In 2016, India had 222.2 million cases, or 28 percent of cases seen globally. Ascaris lumbricoides is an intestinal parasite that confers severe health consequences, including growth retardation and impaired cognitive development.

102.4 million cases were reported in 2016 in India, or 23 percent of the global total of 450 million. While hookworm infection rarely results in death, it can lead to iron-deficiency anemia and malnutrition. Chronic health problems resulting from these conditions include lethargy, impaired physical and cognitive development, and adverse pregnancy outcomes.

India saw 68 million cases of this intestinal roundworm infected, or 16 percent of the global total.  Heavy infection in children can lead to severe anemia, growth retardation, and impaired cognitive development.

In 2016, India saw more than half of all dengue cases globally (53 percent).  Dengue virus is a leading cause of illness and death in the tropics and subtropics. Dengue is caused by any one of four related viruses transmitted by mosquitoes.

India saw 8.7 million cases of this mosquito borne parasite, or 29 percent of the global total. Lymphatic filariasis, commonly known as elephantiasis, is a painful and profoundly disfiguring disease.

Trachoma is an infectious disease of the eye caused by the bacterium Chlamydia trachomatis, and is the world’s leading cause of preventable blindness. In 2016, India saw 1.8 million cases, or 53 percent of the world’s total.

More than 30 percent of the world’s cysticercosis cases were reported in India in 2016. Human cysticercosis occurs either by the direct transfer of Taenia solium eggs from the feces of people harboring an adult worm to their own mouth (autoinfection) or to the mouth of another individual, or indirectly by ingestion of food or water contaminated with the eggs. When the person ingests the eggs, the embryo escape from the shell and penetrates the intestinal wall, gets into the blood vessels, where they spread to muscle, or more seriously, the eyes, heart or brain.

According to WHO, India may account for more than one-half of the global prevalent and new cases of leprosy. Leprosy is a bacterial disease mainly affects the skin, the peripheral nerves, mucosa of the upper respiratory tract, and the eyes.

India reported nearly 120,000 cases in 2016, or 12 percent of the world’s burden. Human echinococcosis is a zoonotic disease (a disease that is transmitted to humans from animals) that is caused by parasites, namely tapeworms of the genus Echinococcus.

Forty-five percent of the world’s visceral leishmaniasis cases were reported in India in 2016. Also known as kala-azar, visceral leishmaniasis  is characterized by irregular bouts of fever, substantial weight loss, swelling of the spleen and liver, and anemia (which may be serious). If the disease is not treated, the fatality rate in developing countries can be as high as 100% within 2 years.

One-third of human rabies cases were reported from India in 2016. Rabies is an infectious viral disease that is almost always fatal following the onset of clinical symptoms. It is spread to people through bites or scratches, usually via saliva.

Hotez and Damania write: If the global community could focus on India’s NTD problem and make inroads, it would substantially reduce the burden of poverty-related neglected diseases. Therefore, focusing on this single nation could dramatically advance the global health agenda. 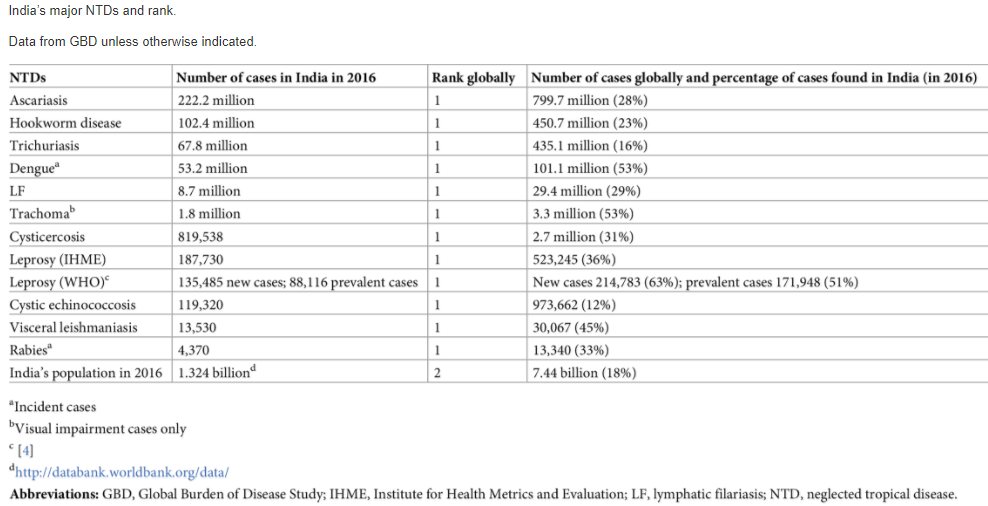