State health and agriculture officials are investigating an outbreak of food borne illness. Retailers and restaurants should not sell or serve alfalfa sprouts and consumers should not eat them at this time. 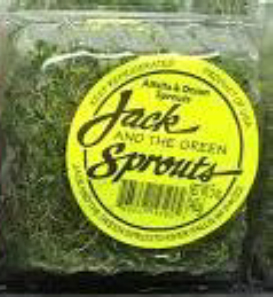 Routine disease monitoring by the Minnesota Department of Health (MDH) identified seven E. coli O157:NM cases in January and early February; E. coli bacteria from those cases all had the same DNA fingerprint illness. The ill individuals range in age from 18 to 84 years, and five are female. Four of the cases are residents of the Twin Cities metro area, and three live in greater Minnesota. Two were hospitalized, and both have recovered.

Two additional cases of E. coli O157 infection, considered part of this outbreak, were identified by the Wisconsin Department of Health Services (WDHS) in Wisconsin residents. Neither case was hospitalized.

Minnesota officials are working with investigators at the Centers for Disease Control and Prevention (CDC), the U.S. Food and Drug Administration (FDA), WDHS, and the Wisconsin Department of Agriculture, Trade and Consumer Protection (WIDATCP). Jack & The Green Sprouts is cooperating with this process and is located in River Falls, Wis., and distributes alfalfa sprouts to states in the upper Midwest and possibly other states. The seven Minnesota cases and at least one of the Wisconsin cases were exposed to the implicated alfalfa sprouts from a variety of locations, including grocery/cooperative stores, restaurants, salad bars and commercial food service.

The FDA is working with state officials to collect samples and determine the source of the outbreak. State officials urge consumers not to eat alfalfa sprouts produced by Jack & The Green Sprouts and retailers and restaurants not to sell or serve them. More information will become available as the investigation proceeds.

Sprouts are a known source of food borne illness. Children, the elderly, pregnant women and persons with weakened immune systems should avoid eating raw sprouts of any kind (including alfalfa, clover, radish and mung bean sprouts). You can reduce your risk of illness by requesting that raw sprouts not be added to your food.

Symptoms of illness caused by E. coli O157 typically include stomach cramps and diarrhea, often with bloody stools, but only a low-grade or no fever. People typically become ill two to five days after exposure, but this period can range from one to eight days. Most people recover in five to 10 days. However, E. coli O157 infections sometimes lead to a serious complication called hemolytic uremic syndrome (HUS), which can cause kidney failure and other severe problems, including death. Those most at risk of developing complications from E. coli O157 include children younger than 10, the elderly, and those with weakened immune systems.