The Malaysia Ministry of Health reports following the polio outbreak in Sabah, environmental surveillance activities for polio virus have been strengthened by expanding the sampling location to 64 locations nationwide. 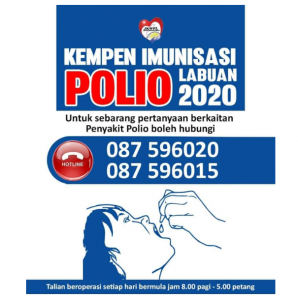 Polio virus was detected in sewage samples taken in the Labuan Federal Territory (WP) and certified by the World Health Organization (WHO) Reference Laboratory in Australia. However, there have been no cases of WP Labuan residents so far based on the Acute Flaccid Paralysis (AFP) and screening of 41 healthy children under 5 years randomly conducted in WP Labuan.

Following the detection of polio virus in the environment, the MOH through the Labuan WP Health Department conducted a Polio Immunization Campaign to prevent infection among the population. The campaign involved the delivery of two (2) doses of bivalent oral polio type 1 and 3 (bOPV) vaccine that were administered into the mouth by targeting all children under the age of 13 throughout Labuan WP.

All parents at WP Labuan must ensure that children under the age of 13 receive the oral polio vaccine as specified, according to a schedule notified by the Labuan WP Health Department.

In addition, injected polio vaccines in the form of a five-line vaccine (DTaP-IPV / Hib) containing diphtheria, tetanus, pertussis, polio and Haemophilus influenzae type b antigens should continue to be taken according to the schedule set at ages 2, 3 , 5 and 18 months. This is to ensure that every child is protected from the polio infection. An oral polio vaccine is an additional polio vaccine, to ensure the spread of polio virus.

At the same time, the MoH through the Sabah State Department of Health is continuing the Polio Immunization Campaign in Sabah. There is no increase in polio cases in Sabah where the number of confirmed polio cases through laboratory testing remains four (4) cases. Acute Flaccid Paralysis (AFP) and environmental surpluses for polio virus continue throughout the country.

For children in states other than Sabah and WP Labuan, parents need to make sure their children get the polio vaccine on the schedule set at 2, 3, 5 and 18 months. If there are children who have been vaccinated against polio vaccine, parents are advised to go to any health clinic for rescheduling the vaccine according to the age of the child.