Health officials in Samoa released the latest numbers on the measles outbreak in the country today. The Ministry of Health confirms a total of 5,080 measles cases have been reported to the Disease Surveillance Team, since the outbreak started. There were 85 recorded in the last 24 hours. 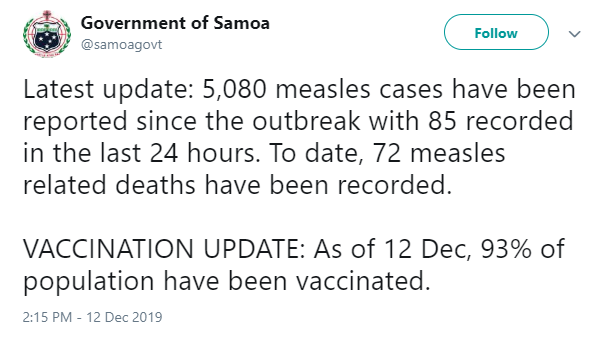 There are currently 169 measles cases who are in-patients at all health facilities. Of this, 127 are at the Tupua Tamasese Meaole Hospital (TTMH), 4 at Poutasi District Hospital, 1 at Lalomanu DH, 24 at the Leulumoega Rural District Hospital, 5 at the Malietoa Tanumafili II Hospital (MTIIH) 5 at Foailalo DH and 3 at Safotu District Hospital. Admissions include 18 critically ill children in ICU/HDU.

All 3 pregnant women previously admitted at TTMH were treated and discharged home well within the last 24 hours.

The total number of measles cases admitted to all hospitals recorded for the outbreak to date is 1,607. Of that, 1,366 (85%) patients have been discharged.

To date, 72 measles related deaths have been recorded. There were no fatalities in the last 24 hours.

As of December 12th, 2019, approximately 93% of all eligible people in Samoa have been vaccinated against measles.