The Tshopo Provincial Health Division, in north central Democratic Republic of the Congo (DRC) were first notified in July of a potential outbreak following the deaths of people with symptoms of fever, headache, and neck stiffness. The progression to death was rapid occurring one to three hours after the onset of symptoms. 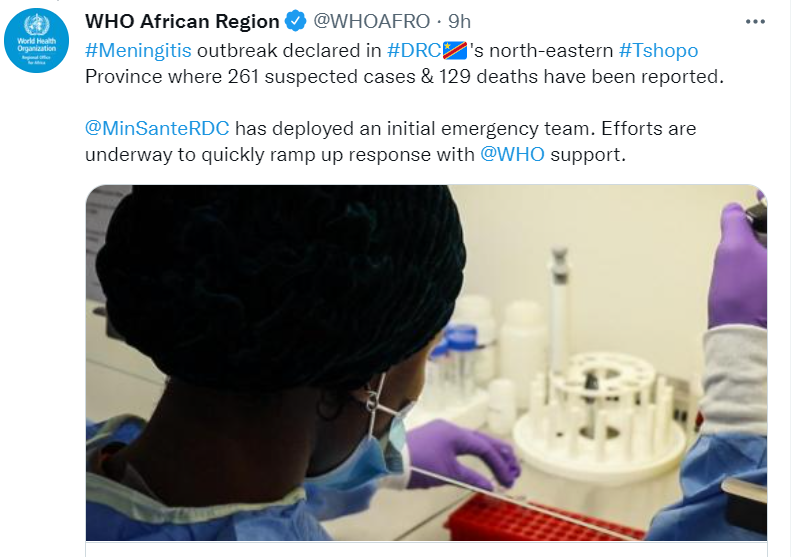 DRC officials have since declared an outbreak. To date, 261 suspected cases and 129 deaths have been reported.

Confirmatory tests carried out by the Institut Pasteur in Paris detected Neisseria meningitidis – one of the most frequent types of bacterial meningitis with the potential to cause large epidemics.

“Meningitis is a serious infection and a major public health challenge. We are moving fast, delivering medicines and deploying experts to support the government’s efforts to bring the outbreak under control in the shortest possible time,” said Dr Matshidiso Moeti, WHO Regional Director for Africa.

Most cases (85%) are persons above the age of 15 years. Particularly worrisome is the high case fatality ratio among cases from the province which is as high as 50%.

Parts of northern Democratic Republic of the Congo are considered to be in the African Meningitis Belt, an area within sub-Sahara Africa the spanning from Senegal in West Africa to Ethiopia in East
Africa that has a considerably high incidence of meningitis cases particularly caused by Neisseria meningitidis. This includes Tshopo province where the current outbreak of suspected meningococcal
meningitis is ongoing.

Madagascar: Pneumonic plague outbreak in Antananarivo, according to media report

One thought on “Meningococcal meningitis kill half of cases in Tshopo province, DRC”