by News Desk
September 27, 2022
Headlines, US News
No Comments

In a follow-up report about measles in Minnesota, state health officials report as of September 21, 10 confirmed measles cases have been reported. 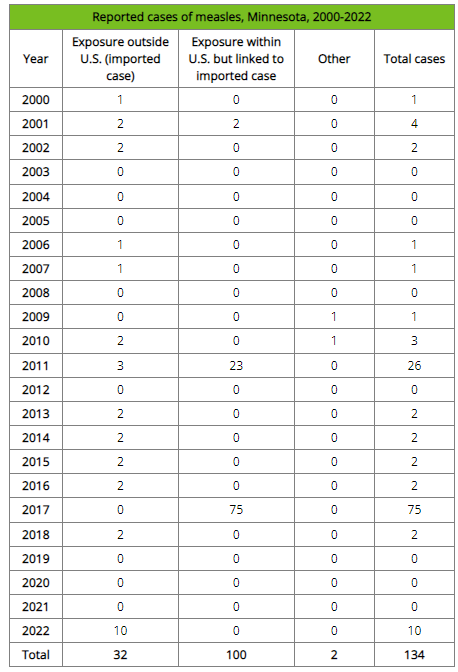 All the cases are classified as travel-related.

Measles was declared eliminated in the U.S. in 2000, but it is still common in other parts of the world.

Minnesota health officials are encouraging providers to be on high alert for measles among patients returning from recent international travel to endemic or outbreak areas (including Europe, the Middle East, Asia, Africa, and South America).

Individuals of any age who are not vaccinated have a high chance of exposure to measles when traveling to countries where measles is still common.

Initial symptoms of measles include a high fever, cough, runny nose, and watery eyes followed by a rash that typically spreads from the head to the rest of the body. It generally takes eight to 12 days from exposure to someone with measles to develop the first symptom, which is usually fever. The measles rash usually appears two to three days after the fever begins. Measles can be a serious disease that can lead to hospitalization and even death. If you have symptoms of measles, call your doctor or clinic and they will let you know if you need to come in for a visit.

Syphilis cases up 33% in Minnesota

Minnesota to be first to screen all newborns for congenital cytomegalovirus

It's the best time to make some plans for the future and...

爱情英文句子唯美（英语爱情句子唯美简短）1.We met at the wrong ...

cheapest cialis generic online au Are you an expert f...

Since both screening and not screening could also be affordable choices, depending...