A Doctors Without Borders physician who returned from Guinea more than a week ago has tested positive for the Ebola Virus Disease (EVD). Craig Spencer, 33, developed symptoms of high fever and diarrhea and reported this Thursday and was admitted and isolated at Manhattan’s Bellevue Hospital, one of the eight hospitals in New York that Governor Cuomo designated earlier this month as part of his Ebola Preparedness Plan to handle potential cases. 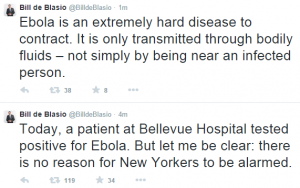 That facility is prepared and equipped for the isolation, identification, and treatment of any such patients.

Dr Spencer is the fourth person to be diagnosed with the disease in the US. Spencer had been working with Doctors Without Borders (MSF) in Africa, treating Ebola patients in Guinea, sources said.

The CDC has dispatched a 3 person Ebola response team to New York.

Confirmation testing at the Centers for Disease Control and Prevention’s laboratory will be done. Spencer had returned through JFK Airport on Oct. 17 and participated in the enhanced screening for all returning travelers from these countries. He went through multiple layers of screening and did not have a fever or other symptoms of illness.

Contract tracing of Spencer’s contacts will be extensive as he traveled in the public frequently since arriving in New York.

Ebola is spread through direct contact with bodily fluids of a sick person or exposure to objects such as needles that have been contaminated. The illness has an average 8-10 day incubation period (although it could be from 2 to 21 days). CDC recommends monitoring exposed people for symptoms a complete 21 days.