The Centers for Disease Control and Prevention (CDC) and several states are investigating a multistate outbreak of Listeria monocytogenes infections linked to deli-sliced meats and cheeses.

In interviews, ill people report eating different types and brands of products, including meats and cheeses, purchased from and sliced at deli counters in many different retail locations.

The outbreak strain has been identified in samples taken from meat sliced at a deli and from deli counters in multiple stores. A single, common supplier of deli products has not been identified.

People at higher risk for severe Listeria infection should handle deli-sliced meats and cheeses carefully to prevent illness. Pregnant women and their newborns, adults age 65 and older, and people with weakened immune systems are more likely to get sick with listeriosis. 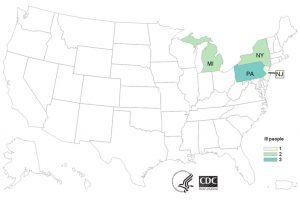 One thought on “Multistate Listeria outbreak linked to deli meats, One death reported”