by News Desk
April 9, 2019
Headlines, US News
No Comments

Commissioner of the New York City Department of Health and Mental Hygiene, Dr. Oxiris Barbot issued an order to the residents and those who work or attend school in the neighborhood of Williamsburg, Brooklyn, New York who has not been vaccinated with the measles-mumps-rubella (MMR) vaccine to be vaccinated. 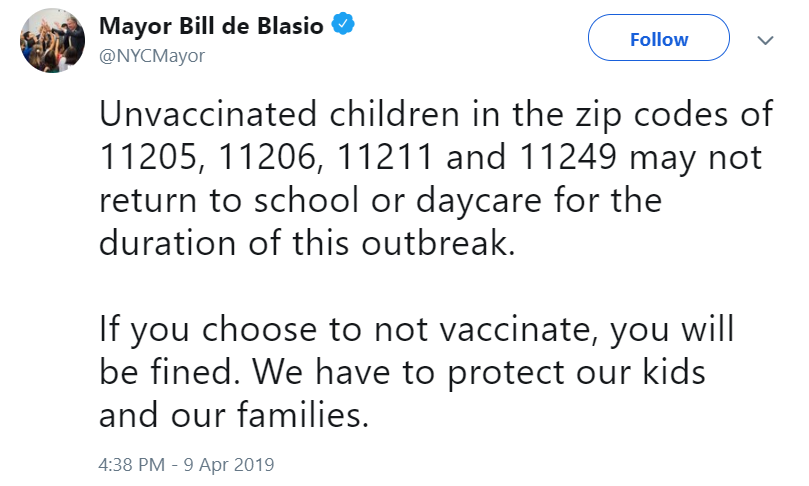 People who demonstrate they are immune from measles or should be medically exempt from this requirement will not need to get vaccinated.

Dr. Barbot notes that she finds the ongoing measles outbreak in Williamsburg to be an existing threat to public health in the City of New York

IT IS HEREBY ORDERED that any person who lives, works or resides within the 11205, 11206, 11211 and/or 11249 zip codes and who has not received the MMR vaccine within forty eight (48) hours of this Order being signed by me shall be vaccinated against measles unless such person can demonstrate immunity to the disease or document to the satisfaction of the Department that he or she should be medically exempt from this requirement.

If the Health Department identifies a person with measles or an unvaccinated child exposed to measles in Williamsburg, that individual or their parent or guardian could be fined $1,000.

NYC Mayor Bill de Blasio said we cannot allow measles to make a comeback in New York City. This is a dangerous disease and we need to stop it here and now

As of April 8, 2019, there have been 285 confirmed cases of measles in Brooklyn and Queens since October. Williamsburg has reported 228 confirmed measles cases of the total.

Most of these cases have involved members of the Orthodox Jewish community.

From January 1 to April 4, 2019, 465 individual cases of measles have been confirmed in 19 states. This is the second-greatest number of cases reported in the U.S. since measles was eliminated in 2000.