The Nigeria Centre for Disease Control and Prevention (NCDC) reported an additional 41 confirmed monkeypox cases the week ending September 4, bringing the country’s total to 318 confirmed cases this year to date. 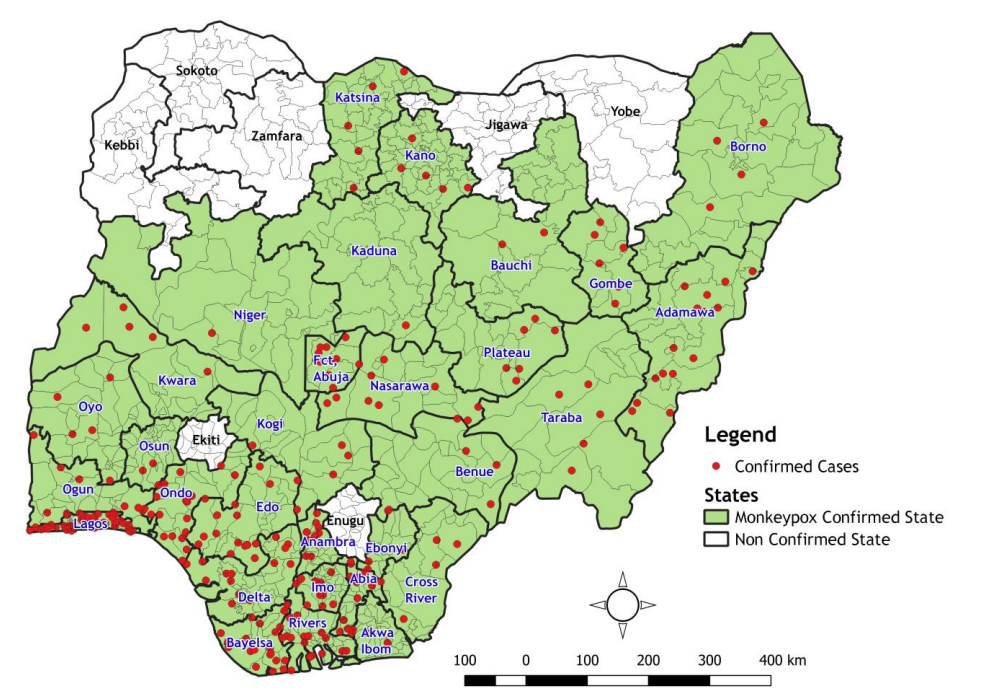 From January 1 to September 4, 2022, confirmed cases have been reported from 30 states, including 63 cases from Lagos state.

Since the re-emergence of monkeypox in Nigeria in September 2017, 544 confirmed cases have been reported from 32 states.

According to the NCDC, Monkeypox (MPX) is a rare viral zoonotic infectious disease (i.e., an infection transmitted from animals to humans) that is endemic in areas in and near tropical rainforests in Central and West Africa. It is caused by the Monkeypox virus which belongs to the same Orthopoxvirus genus and Poxviridae family of viruses as the Variola virus (Smallpox virus), the Vaccinia virus (used in smallpox vaccine for eradication programme), and the cowpox virus (used in earlier generations of smallpox vaccines) and some other viruses. There are two types (clades) of the MPX virus: the West African and the Central African clade. Available data suggests human disease with the Central African clade is more severe than with the West African clade

The exact reservoir of the MPX virus is still unknown although rodents are suspected to play a part in transmission. So far, the virus itself has been identified in wild animals in Africa only twice (from a type of squirrel and a type of monkey in the Democratic Republic of Congo and Cote d’Ivoire respectively). Rodents from West Africa (rats, dormice, and squirrels) being sold in a store in the United States contributed to a 2003 outbreak.

The virus can spread both from animal-to-human (which is the first (spill-over) event preceding the detection of cases in humans), and from human-to-human. Animal-to-human transmission may occur by direct contact with the blood, body fluids, the skin or mucosal lesions of infected animals (e.g., monkeys, squirrels, and rodents). This can happen through a bite, scratch, handling of, or eating inadequately cooked or other products of infected bushmeat. Human-to-human (person-to-person) transmission occurs when a person comes into contact with the virus from an infected human, or materials contaminated with the virus such as clothing, beddings. As a consequence, household members or healthcare workers are at greater risk of infection. The virus enters the body through broken skin (even if not visible), the respiratory tract, or the mucous membranes of the eyes, nose, or mouth. Human-to-human transmission may also occur through aerosols/droplets following prolonged face-to-face or close contact. The East African clade is better than the West African clade in human-to-human transmission.

Symptoms of the illness include fever, headache, body aches, weakness, swollen lymph nodes (glands) and a rash. After about 1 to 3 days of fever, the rash erupts, beginning on the face and then spreading to the body with the face and palms/soles being mostly affected. They can also occur in and around the genitals which is why contact during sex is one mode of transmission. It is mostly a self-limiting illness that often lasts for 2−4 weeks.