The outbreak of the protozoan parasite, Cryptosporidium, in Central Ohio has surpassed the 1,000 case mark, Columbus Public Health reported Friday. The official case tally , affecting not only Columbus County, but neighboring Franklin and Delaware Counties, reached 1,003 as of Nov. 11. 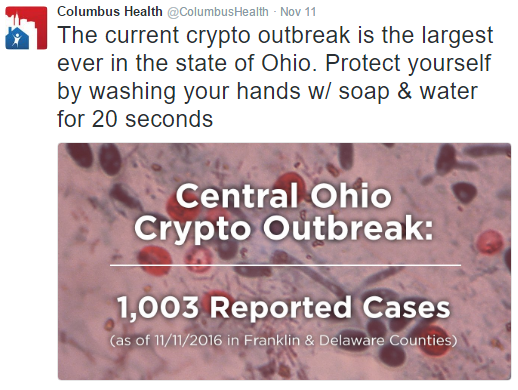 Crypto is a parasite that causes diarrhea.  It is found in the fecal matter of a person who has been infected by crypto.  It is spread by swallowing water that has been contaminated with fecal matter containing crypto.   It can also be spread from human-to-human contact.

Symptoms include watery diarrhea with abdominal pain and cramping, which can be accompanied by dehydration, weight loss, fever, nausea and vomiting. Symptoms can last for two weeks, with improvement often followed by recurrence. Infected persons can continue to spread the disease for several weeks after diarrhea subsides, so they should avoid activities involving recreational waters for at least two weeks after diarrhea subsides and practice diligent handwashing.

Through Nov. 5, the Centers for Disease Control and Prevention (CDC) has reported 1,731 cases in Ohio year to date, this compares to 373 cases during the same period in 2015.