In order to prevent the spread of COVID-19 infections in Lima and the northern coastal regions of the country, the Government decided to reduce the capacity in commercial centers and conglomerates, close the use of the beaches and extend the curfew , informed the Minister of Health, Pilar Mazzetti Soler.

“The measures taken will be in effect from December 22 to January 4,” said Mazzetti, who explained that the maximum capacity allowed in centers and commercial conglomerates will be 40% in the regions of Tumbes, Piura, Lambayeque, La Libertad, Lima Provinces, Metropolitan Lima, Callao and the province of Santa (Áncash).

In the case of the beaches, in the same period described, their use will only be allowed for the practice of individual sports or in pairs. “We have to avoid the consumption of food, liquor and crowds on the beaches in the next parties,” explained the Minister of Health. 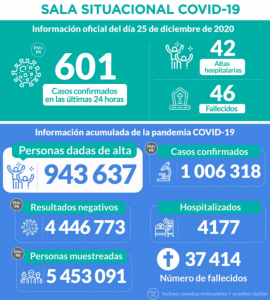 Regarding the curfew, it was indicated that in the province of Santa, La Libertad, Lambayeque, Piura and Tumbes the circulation of citizens will be prohibited between 10 at night and 4 in the morning of the next day. Meanwhile, in Lima Provinces, Metropolitan Lima and Callao the immobilization will be from 11 at night until 4 in the morning the next day.

Control of the northern border will also be strengthened to detect cases of COVID-19.

Minister Mazzetti indicated that these measures have been taken based on the monitoring of the pandemic taking into account several indicators, including the occupation of hospital beds, the occupation of COVID-19 beds and mortality.

In addition on Saturday, Mazzetti announced ivermectin is not a drug that the Ministry of Health (Minsa) recommends as a general treatment against COVID-19 or for preventive use and discouraged indiscriminate use.

Although ivermectin is in the Minsa medical guide for the care of COVID-19, it is also clearly established that it is only recommended for mild or outpatient cases with risk factors. “It is not for general use. A doctor must prescribe it and under his responsibility,” said the minister.