by Robert
July 17, 2014
Latin America and the Caribbean
3 Comments

El Departamento de Salud in Puerto Rico has declared an epidemic of the chikungunya virus because it is new to the island, the population has no antibodies against it, and cases are concentrated in one region, according to a El Vocero de Puerto Rico report today (computer translated). 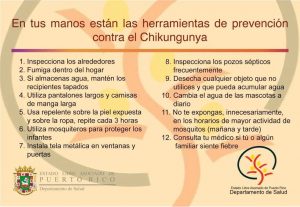 As of June 25, 206 cases had been reported in the island with 89%  of the cases in Puerto Rico seen in the metro areas of San Juan, Carolina, and Bayamón.

Health Secretary Ana Rius announced the epidemic this morning while stating that with administrative order #324 declaring the epidemic, all medical plans must cover the cost of the chikungunya test. Patients under health reform also have coverage.

This comes when the first locally acquired chikungunya cases were reported in Florida. According to the Pan American Health Organization (PAHO), there have been 355,000 locally acquired cases in the Caribbean and Central and South America. For more infectious disease news and information, visit and “like” the Infectious Disease News Facebook page