West Virginia: Syphilis cases are up in Morgantown

Officials with the Monongalia County Health Department report the number of syphilis cases are on the rise in Morgantown, mostly among men who have sex with other men. 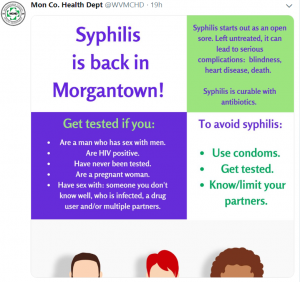 Health officials want to alert the public to the outbreak, offer suggestions on how to avoid and detect syphilis and provide information on other efforts being made to curtail the number of cases of this sexually transmitted disease (STD) as well as others that are on the rise.

“One of the common public health diseases that previously had died down significantly is STDs,” said Dr. Lee B. Smith, MCHD executive director and county health officer.

“However, with high-risk behaviors and unprotected and anonymous sexual intercourse, syphilis, as well as gonorrhea and chlamydia, are increasing tremendously.”

“I think that if we look specifically at Mon County, what we see is the incidence of syphilis is not related to intravenous (IV) drug use as it is in other areas of the state, but is related to men having sex with men who participate in high-risk behavior such as having frequent, anonymous sex,” Smith said.

Sexually transmitted infections in the US: ‘We are sliding backward’

Syphilis goes through four stages that can overlap:

The first symptom of primary syphilis is frequently a small, round, firm ulcer called a chancre (pronounced “shanker”) at the place the bacteria enters the body (usually the penis, vulva or vagina, but it may appear on the cervix, tongue or lips). There is usually just one chancre, however there can be many. Swollen lymph nodes in these areas are common.

Because chancres are painless and can occur inside the body, you may not notice it. It disappears after 3-6 weeks whether you are treated or not. If primary syphilis goes untreated, it then moves into the secondary stage.

The most common symptom of this stage is a non-itchy rash. The rash is usually on the palms of the hands (see below) and soles of the feet, it can cover the whole body or only a select few areas. This occurs 2-10 weeks after the chancre heals. Other common symptoms are sore throat, fatigue, headache, swollen glands and less frequently hair loss and lesions in the mouth.

Much like primary syphilis, secondary syphilis will disappear even without treatment. If untreated it goes into the latent and tertiary stages.

This is the hidden stage of syphilis. At this stage there are no symptoms. This stage can last for weeks or decades.

Early latent syphilis is still an infectious stage and you can transmit the disease to your partner. In late latent syphilis, the risk of infecting a partner is low or absent.

Signs and symptoms may never return or if untreated it goes into the most serious stage, tertiary syphilis.

Even without treatment only a minority of infected people develop these horrible complications. In this stage, the bacteria will damage the heart, eyes, brain, bones, joints and central nervous system. This can happen decades after the initial infection. This can result in blindness, deafness, memory loss, heart disease and death. Neurosyphilis is one of the most severe signs of this stage.

It is very easy to detect early stages of syphilis through blood tests that detect antibodies.

It is easy to treat syphilis in the early stages with one injection of Penicillin. Later stages or neurosyphilis may take daily doses given by IV in a hospital. It is important to note in late syphilis, any damage done to organs cannot be reversed.