A look at Ebola transmission

by Guest Author
October 3, 2014
Blogs
No Comments
Dr. Ian Mackay, PhD is a virologist with The University of Queensland in Brisbane, Australia. See more of Dr Mackay’s blogging at Virology Down Under

“Aerosol” is a messy word. It means different things to different people. So does “airborne”.

What’s in an aerosol?
Here we’re talking about a mixture of different sized stuff. Think  of the size range in a handful the sand from a shelly beach.

A cough/sneeze includes big, wet, heavy propelled droplets that quickly fall to the ground or hit your windscreen (hateit when that happens) or your friend’s face (they hate it when that happens) down to dried or gel-like “droplet nuclei” that can float in the air for hours, travelling where the wind blows them; and every size in between.

I’ve also talked about this before, here.

The public rightly get confused about aerosols. And science and physics and medicine have their own defined meanings – sometimes at odds with each other – that may well be out of step with what the public think.

I do wish the big public health entities would settle on some definitions for these and other words. It would make everyone’s life a lot easier.

When we talk about “direct contact” and Ebola virus transmission, we do include the bigger wetter heavier droplets that might be propelled from of a sick person during vomiting, or coughing as a risk for transmitting virus.

Even though that is not physical direct contact, and even though the droplets travel across a gap between people – through the air – it is still a direct line from person A (red in the graphic below) to B (blue). If B is too far away, then those droplets fall to the ground before they hit B. The droplets may remain infectious on the ground. That depends on temperature, humidity, surface type and the type and amount of virus.

Even though it involves a short period of travel through the air, coughing wet droplets directly onto someone’s mucous membranes is not an airborne thing. The term “airborne” is reserved for floaty clouds of droplet nuclei. In humans droplet nuclei have not, to the very best of our knowledge and observations and tests, been found to contain doses of Ebola virus that cause disease in humans. Too little virus coughed into the cloud perhaps or too little that survives..it’s not known why, but it is pretty clear that in households where a case of Ebola virus disease was residing, only those household members who had direct contact developed disease, and those that breathed the same air but did not have direct contact, did not develop disease.

Please don’t say Reston ebolavirus or the Hot Zone. That (by all accounts riveting) book was not a scientific work, it is a dramatized work and the language is colourful and emotive and scary. The Reston ebolavirus event in non-human primates was neverproven to be airborne.

Lastly and most recently, an airborne route was not found to play any role in causing disease or infection when Ebola virus infected and uninfected non-human primates were caged near each other. I’ve written about this and other non-human primate studies here.

Healthcare workers wear face protection (masks and goggles) to prevent their eyes and mouth being hit by wet droplets of virus-laden body fluids while they are in close contact with ill Ebola virus diseases patients. The also wear all-over gowns so that they don’t have to sterilize their clothes between each room they move between. Use of protective equipment doesn’t need to convey confusing messages about the type of route Ebola virus uses to spread but it’s just lacking in enough public discussion via forums the public attend/view. Knowledge is a bit like vaccination – when coverage reaches a certain level, the community is safe (or it’s understanding is complete anyway).

And why wouldn’t healthcare workers protect themselves from ill patient fluids-however they come into contact with them? For a healthcare worker, body fluids from ill people they are in close and often prolonged contact with, should generally be considered infectious. This is the case whether we’re talking about Ebola virus disease, HIV, measles, influenza or something else. Some of those are caused by airborne viruses, some, like Ebola virus and HIV, not.

Below is my latest attempt at trying to make all those words into a picture.

If you have ways that can help me make this even simpler – please pass them along (thanks @chrisfharvey). 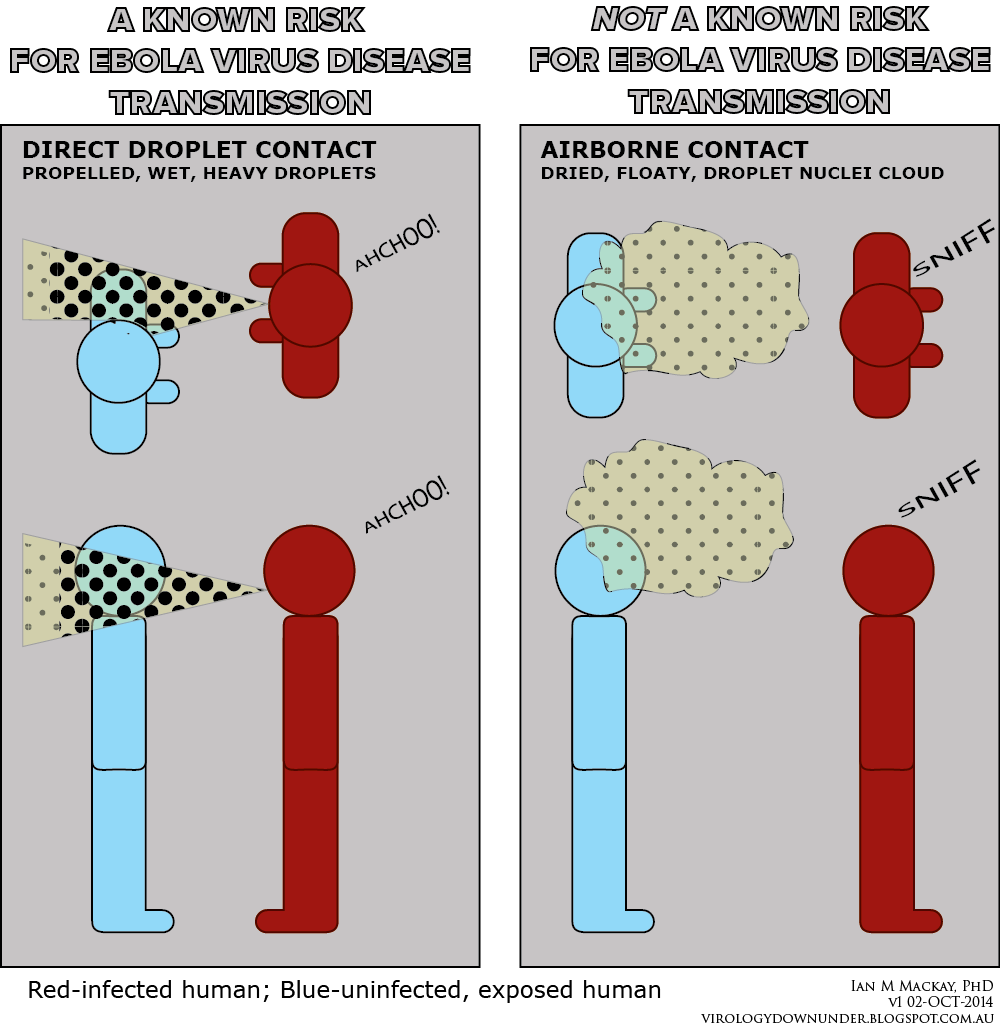