Roughly six weeks ago, after a relatively quiet July and August, we began to see a slow uptick in the number of MERS-CoV infections being reported out of Saudi Arabia.  While the numbers remain modest – even compared to the same time last year – the clustering in Taif east of  Mecca prior to the Hajj is concerning. 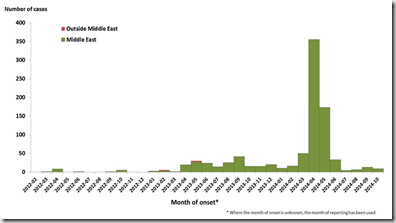 Local officials have publically been denying charges of a serious outbreak in the Taif region (see FluTrackers thread Saudi Arabia – Taif government denies coronavirus MERS epidemic in hospitals),  but the following line list put together by Sharon Sanders shows 13 cases in Taif over the past 6 weeks.

While Arabic print media (and even Arabic language social media) has been largely quiet about MERS the past few months  – replaced with stories about the Hajj and Africa’s Ebola threat – over the past couple of days Arabic twitter chatter on MERS has taken off once again.

Unlike last spring, when the role of camels in transmitting the virus was often dismissed (see Saudi MOA Spokesman: Camel Link Unproven), `camels as vectors’ appears to be the newly adopted meme in the media, to the exclusion of any talk of nosocomial or community transmission.

Last September we saw the KSA MOH Reiterates Camel Warnings On MERS, and while the exact role of camels in the transmission of MERS to humans has yet to be established, increasingly camels are being viewed as a  likely zoonotic source of the virus (see EID Journal: Replication & Shedding Of MERS-CoV In Inoculated Camels).

Although certainly a factor, camel-to-human transmission is unlikely to be the cause of the bulk of cases being reported.  A number of cases are reportedly Health care workers, and hospitals have been a frequent amplifying center for MERS outbreaks.

After saying little about the MERS situation in Saudi Arabia for several weeks, yesterday Health Minister Faqih visited King Faisal hospital, and today the media are carrying an obvious `photo opportunity’ along with  warnings  that `additional cases’ might be expected in Taif. 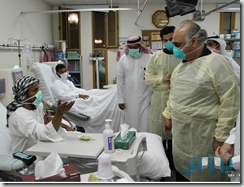 Health Minister: No cure for “Corona” .. and we expect other injuries in Taif (Photos)

Designated Health Minister Adel Mohamed Fakih, the citizens and residents of Ta’if should take necessary preventive actions on dealing directly with the camels, to protect themselves from the virus “Corona”.

This came during his visit to King Abdul Aziz specialist hospital, the King Faisal Hospital in the province, yesterday. The current infection rates in Taif refers to the possibility of new cases in the next period.

He said: “maybe we can uproot the coronavirus in the near perspective because there is no cure or vaccine yet, but the Health Ministry must do whatever they can and all its potential for treating patients and health practitioners and community protection from HIV infection.”

In the same context the command and control center of the Ministry of health a number of immediate actions to curb the infection after recording nine cases of “Corona”, including follow-up to the Ministry of public health experts for all close contacts of patients infected with HIV “SK” in Taif, and transfer any cases of Corona to King Faisal Hospital, transfer unit mobile laboratories to Taif, enabling doctors to obtain the results of virus detection in cases of suspected virus “SK” in record time not exceeding 6 hours.

Meanwhile Arabic twitter chatter is rife with speculation that there are several more cases about to be announced.