While there are reports of dengue fever admissions decreasing over last three weeks, the number of cases is still extremely high in Bangladesh. 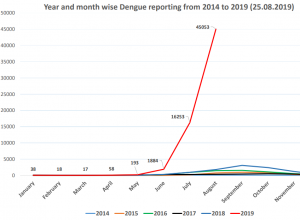 The number of reported infections is six times that of last year, and the actual figures are likely to be higher as many cases go unreported.

Officials data for the dengue death toll is now 47; however, suspected dengue fatalities are well above 100.

There were 10,148 cases and 26 deaths in the country last year. The first case of mosquito-borne viral infection was reported in Bangladesh in 2000.