Oklahoma health officials are reporting a fatality due to Primary Amebic Meningoencephalitis (PAM) in a Carter County resident. The PAM, caused by the “brain-eating amoeba”, Naegleria fowleri, was contracted while swimming in Lake Murray..

This is the second case and death due to Naegleria fowleri in the US this year. A 21-year-old Inyo County, California woman died from the amoeba in June.

This past Monday, Minnesota health officials, who previously reported a suspect Naegleria death in a teen boy, reported that he actually died from a streptococcal brain infection.

Naegleria fowleri is a relatively rare, pathogenic amoeba found in warm or hot freshwater like lakes, rivers and hot springs. It is also possible to get it from dirty unchlorinated or under-chlorinated swimming pools. This parasite is found worldwide and in the United States, it is found mainly in the southern-tier states.

People typically get it by swimming, jumping or playing in freshwater and get the water up their nose. From there the parasite travels to the brain and spinal cord and necrotizes or basically eats brain tissue. The disease is known as primary amoebic meningoencephalitis (PAM) and it has a very rapid progression. Typical symptoms may start after a day or two; headache, fever, nausea and vomiting. Later symptoms may include seizures, irrational behavior, hallucinations and finally coma and death. The course of the disease typically last about a week. Because the symptoms are very similar to bacterial meningitis, PAM may not even be considered in the diagnosis.

Fortunately, it’s a pretty rare disease, with only approximately 30+ cases in the past decade. Unfortunately, treatment is usually unsuccessful with only a handful of people surviving infection.

You should always assume there is some risk when swimming in freshwater. The location and number of amoeba present in a body of water varies from time to time. The Centers of Disease Control and Prevention recommends these four steps to reduce your risk of infection: 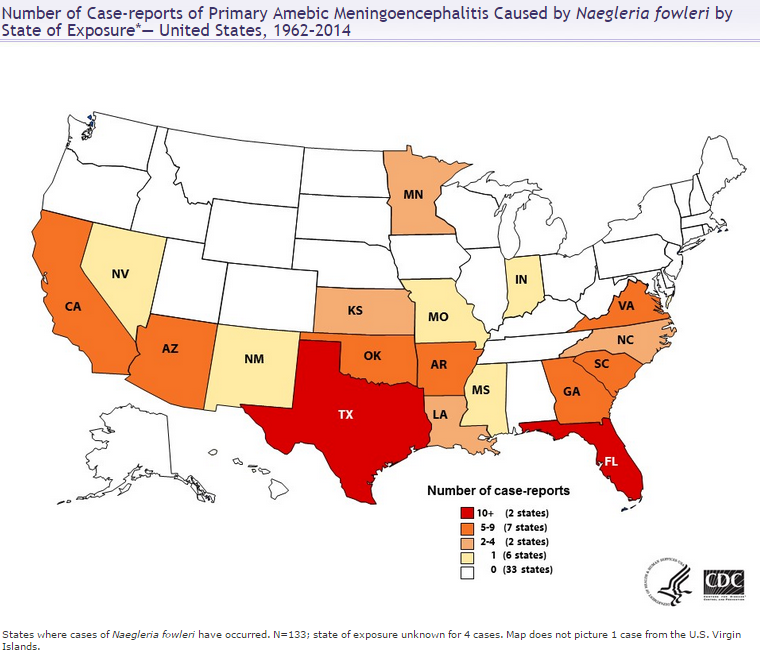