For the second time in a year, a noted physician has come out publicly equating Donald Trump’s behavior to late stage or neurosyphilis.

If you remember last February, infectious disease physician, Dr. Steven Beutler wrote a piece in the New Republic speculating that neurosyphilis may be the cause of Trump’s “bizarre, volatile behavior”.

Listen: The Donald Trump neurosyphilis article: Should a physician comment on this from a distance? 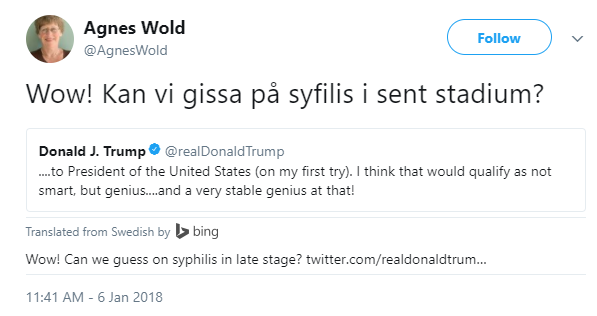 Now on Saturday, a prominent physician and bacteriologist from Sweden tweeted something to the same effect. Dr Agnes Wold tweeted in response to a Trump tweet referencing himself as a “stable genius”- “Wow! Can we make a guess at late-stage syphilis?” (Translated).

Should an infectious disease physician be writing, tweeting or joking about this? Is that the responsible thing?

Just a couple of questions.

In 2016, Dr. Art Caplan from the NYU Langone Medical Center’s Division of Medical Ethics offered his thoughts concerning the ethics of writing a speculative article or commenting on TV and radio and diagnosing from a distance on Medscape.

A handwritten book is a book...

The additional income is available for everyone using this robot. https://fqxtzbiyr.com/14?r=35846...

Valuabⅼe info. Lucky me I found your website by chance, and I ɑm...